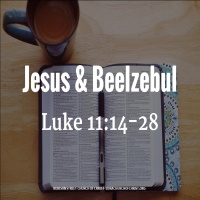 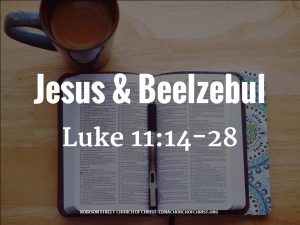 Phillip Stuckey, May 10, 2020
Part of the Expositions on the Gospel of Luke series, preached at a Sunday Morning service


As the Lord continues His journey to Jerusalem, He continues to preach the gospel. Luke now records another encounter Jesus has with a demon. When the people witness His power this time, no one questions what happens, but some have another question. Who is really behind Jesus’ actions? Is it God or Satan?

14 Now he was casting out a demon that was mute. When the demon had gone out, the mute man spoke, and the people marveled. 15 But some of them said, “He casts out demons by Beelzebul, the prince of demons,” 16 while others, to test him, kept seeking from him a sign from heaven. 17 But he, knowing their thoughts, said to them, “Every kingdom divided against itself is laid waste, and a divided household falls. 18 And if Satan also is divided against himself, how will his kingdom stand? For you say that I cast out demons by Beelzebul. 19 And if I cast out demons by Beelzebul, by whom do your sons cast them out? Therefore they will be your judges. 20 But if it is by the finger of God that I cast out demons, then the kingdom of God has come upon you. 21 When a strong man, fully armed, guards his own palace, his goods are safe; 22 but when one stronger than he attacks him and overcomes him, he takes away his armor in which he trusted and divides his spoil. 23 Whoever is not with me is against me, and whoever does not gather with me scatters.

24 “When the unclean spirit has gone out of a person, it passes through waterless places seeking rest, and finding none it says, ‘I will return to my house from which I came.’ 25 And when it comes, it finds the house swept and put in order. 26 Then it goes and brings seven other spirits more evil than itself, and they enter and dwell there. And the last state of that person is worse than the first.”

27 As he said these things, a woman in the crowd raised her voice and said to him, “Blessed is the womb that bore you, and the breasts at which you nursed!” 28 But he said, “Blessed rather are those who hear the word of God and keep it!”