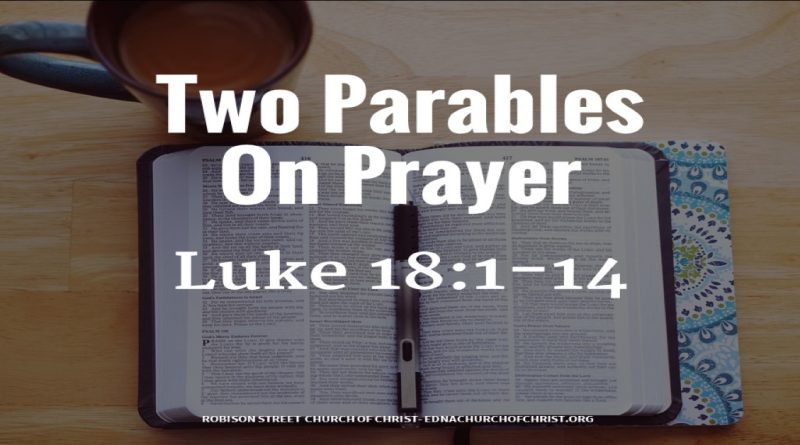 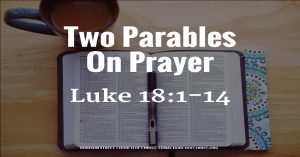 Phillip Stuckey, June 19, 2022
Part of the Expositions on the Gospel of Luke series, preached at a Sunday Evening service


In our last study in the Gospel of Luke, Jesus taught about the two-fold nature of the Kingdom, that it is already here, but not fully realized (Luke 17:20-37). He impressed upon the disciples the need to both enter the Kingdom now and to be prepared for His coming though it may not come at the time they expect or desire (Luke 17:22). In this section, Jesus speaks into that longing reminding all disciples about the importance of perseverance and prayer in two parables.

18:1 And he told them a parable to the effect that they ought always to pray and not lose heart. 2 He said, “In a certain city there was a judge who neither feared God nor respected man. 3 And there was a widow in that city who kept coming to him and saying, ‘Give me justice against my adversary.’ 4 For a while he refused, but afterward he said to himself, ‘Though I neither fear God nor respect man, 5 yet because this widow keeps bothering me, I will give her justice, so that she will not beat me down by her continual coming.’” 6 And the Lord said, “Hear what the unrighteous judge says. 7 And will not God give justice to his elect, who cry to him day and night? Will he delay long over them? 8 I tell you, he will give justice to them speedily. Nevertheless, when the Son of Man comes, will he find faith on earth?”

9 He also told this parable to some who trusted in themselves that they were righteous, and treated others with contempt: 10 “Two men went up into the temple to pray, one a Pharisee and the other a tax collector. 11 The Pharisee, standing by himself, prayed thus: ‘God, I thank you that I am not like other men, extortioners, unjust, adulterers, or even like this tax collector. 12 I fast twice a week; I give tithes of all that I get.’ 13 But the tax collector, standing far off, would not even lift up his eyes to heaven, but beat his breast, saying, ‘God, be merciful to me, a sinner!’ 14 I tell you, this man went down to his house justified, rather than the other. For everyone who exalts himself will be humbled, but the one who humbles himself will be exalted.”